There is another subtler way to understand the trikaya, and it is this understanding that Trungpa Rinpoche taught. He did it in this way.

Stepping to the blackboard, he picked up a piece of chalk and drew this figure. 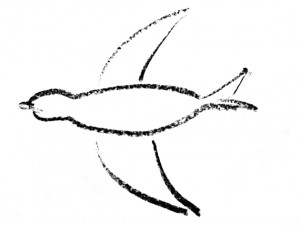 Then he stepped back and asked: “What is this a picture of?” Of course no one wanted to say the obvious, and there was an extended silence until finally some fellow raised his hand and said, “It’s a picture of a bird.”

Rinpoche replied, “It’s a picture of the sky,” and in those six words he taught the entire trikaya.