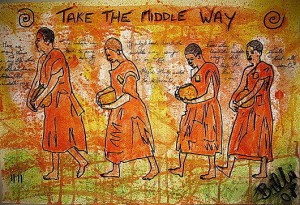 I was thinking the other day how much I admire people who can really stand up for what they believe. You know them – the Democrats that post their Hillary images on Facebook; or the Gun Law proponents. They’re actually not afraid to expose themselves. I thought, I wish I could do that, that’s admirable.

But, then I started thinking – how often do those change the minds of people that are in the middle or vulnerable to listening. Probably not too much. And, then, who do you know to trust? For every lie there’s a truth, and for every truth there’s a lie. And, for every half-truth … and so on. You get the picture.

Buddhist philosophy teaches about being in the middle – The Middle Way. Jesus spoke of being accepting. By being proud of our beliefs (to the point of pounding our chests and screaming “We’re better than you are!”) are we not actually further alienating our fellow humans? Aren’t we further separating the extremes – getting farther away from the middle?

Is it doing more harm than good?

If we quit, will we be leaving ourselves open to the lies of the “competition” or those with other views. And, without being held in check, will that mean that everyone will only believe what they are hearing?

Maybe it’s a matter of simply saying what you believe in, and not what others believe in. Speak about what you think is right and why you think it’s right, but without the incendiary provocations, which elicit inflammatory rebuttals. Can it be done. Start first with yourself and see where it goes.