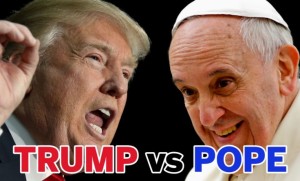 So, I’m going to get into the political arena again. First, I’m not Catholic and second, I’m not Republican. I’m not defending Trump and I think the current Pope is absolutely marvelous.

However, it feels as though one of Jesus’s greatest teachings was being nonjudgmental. If that’s the case, isn’t the Pope judging the Donald when he alluded to the building of walls issue.

The world takes all kinds, and I can accept that. That doesn’t mean I have to agree or follow, but I don’t think it’s my place to judge whether or not someone is Christian or not. In fact, we all sin, and if that logic holds true, then are there any real Christians?